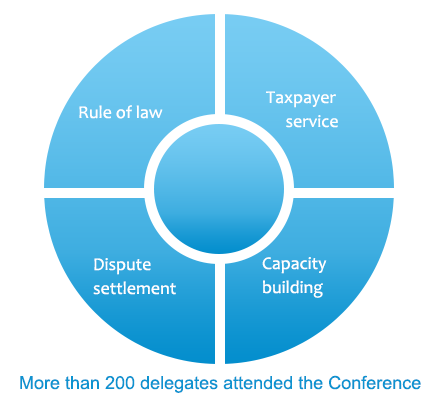 The Belt and Road Initiative Tax Cooperation Conference (BRITCC) was held in Astana during May 14th-16th, 2018, co-hosted by the State Revenue Committee of the Ministry of Finance of the Republic of Kazakhstan (SRC), the State Taxation Administration of the People' s Republic of China (STA), the OECD's Centre for Tax Policy and Administration and the OECD's Forum on Tax Administration. More than 200 delegates from tax administrations, international organizations, academic institutions and businesses attended the Conference. Four correlated topics on taxation, i.e. rule of law, taxpayer service, dispute settlement and capacity building, were deliberated at the Conference.

Delegates agreed that stronger support is needed to achieve better coordination and cooperation among tax administrations of BRI jurisdictions and thus proposed that a mechanism should be officially established to enhance BRI tax administration cooperation. The Conference marked a milestone in strengthening tax exchanges and cooperation among jurisdictions supporting the Belt and Road Initiative with a view to promoting sustainable and inclusive economic development.

September 26th- 28th, 2018 multilateral consultations were held for the establishment of the BRITACʘM.

Building on the Astana Proposal, the Working Group Meeting of the BRITACʘM, co-chaired by STA of China and SRC of Kazakhstan, was held in Yangzhou, China from Sept. 26th to 28th, 2018, with 35 delegates from tax administrations of 22 jurisdictions and one representative each from OECD and IBFD convened for consultation on the establishment of the BRITACʘM. The meeting achieved fruitful outcomes where all participants expressed willingness of participation in the BRITACʘM and provided inputs on the draft Memorandum of Understanding on the establishment of the BRITACʘM. 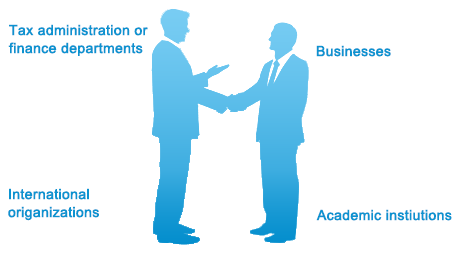 We note the pressing need for tax administration capacity building amongst BRI jurisdictions. We will prioritize our work in this area and support increasing efforts by international organizations, in particular, the Platform for Collaboration on Tax, in assisting BRI jurisdictions to accomplish the objectives of the UN 2030 Agenda for Sustainable Development and the Addis Ababa Action Agenda.

We will align our capacity building activities with other initiatives run by international organizations in an effort to avoid duplication and deliver the BRI tax administration capacity building initiatives in a coordinated, cost-effective and sustainable manner, which is tailored to the real needs of emerging and developing economies.

To this end, we will respect the spirit and letter of law in taxation, and expect that taxpayers will make a similar commitment. We reaffirm our commitment to ensuring the tax system is administered fairly, transparently and with consistency.

We are determined to apply the laws and the tax treaties in a fair, predictable and consistent fashion.

We recognize the importance for BRI jurisdictions to minimize and resolve cross-border tax disputes in a timely and principled manner in order to better protect the legitimate rights of taxpayers on one hand, and to secure domestic tax base on the other.

We call on BRITACʘM Member TAs to respect and comply with international standards, particularly those relating to Base Erosion and Profit Shifting and to Transparency and Exchange of Information for Tax Purposes, as well as those in tax treaties signed by their governments.

We encourage BRITACʘM Member TAs to dedicate resources to relevant parts of their administrations dealing with dispute resolution procedures.

We encourage BRITACʘM Member TAs to dedicate resources to relevant parts of their administrations dealing with dispute resolution procedures.

Economic growth depends in part on the growth in cross-border trade and investment, which requires high level of tax certainty.

We reaffirm our commitment to offering support to taxpayers in order to improve tax certainty by enhancing the transparency and predictability of tax laws in order to build mutual trust between taxpayers and tax administrations.

We highlight the importance of minimizing tax uncertainty by avoiding excessive discretion as well as increasing consistency and transparency of tax administration.

We encourage BRITACʘM Member TAs to streamline tax administration procedures, taking into account country-specific conditions. In light of this, we believe that efforts should be made in enhancing tax administration cooperation, improving taxpayer service, protecting taxpayers’ legitimate rights, and avoiding arbitrary decisions on taxpayers’ compliance status.

We reaffirm our commitment to maximizing the benefits of emerging technologies by adopting a long-term strategy to digitalizing tax administration, improving digital infrastructure within tax administrations and working to build improved taxpayer trust, privacy and data protection. 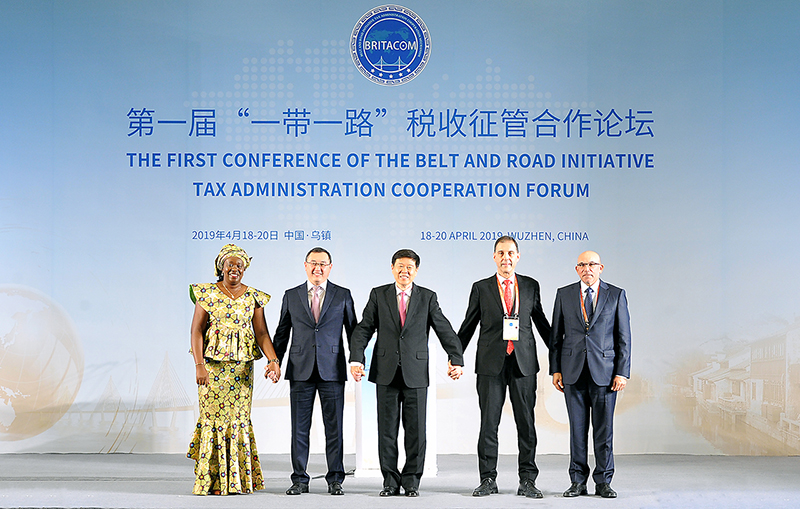 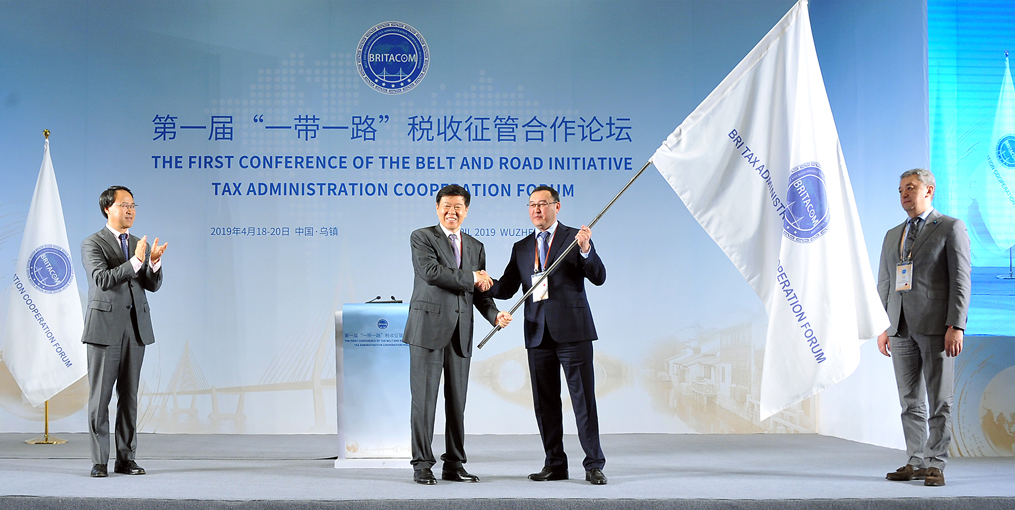 Mr. WANG Jun passed the BRITACʘM flag
to Mr. Marat Sultangaziyev, announcing the
host of the 2nd BRITACOF at the closing
ceremony.

A joint press conference was held on the last day of the BRITACOF Conference. 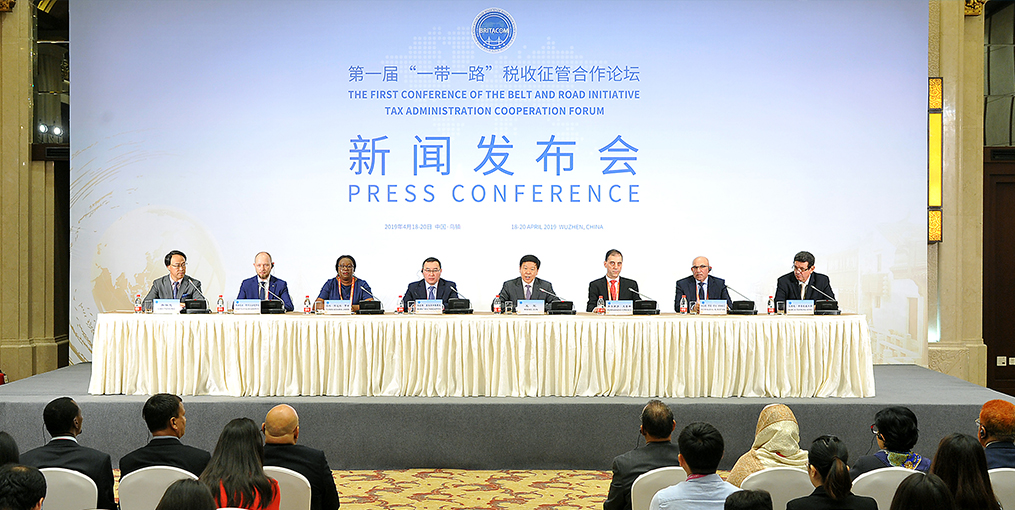 The BRITACʘM was officially launched.

The BRITACʘM mainly consists of the Council, the decision-making body, and the Secretariat which is a liaison office supporting the daily operation of the BRITACʘM. Two key pillars will underpin the success of the BRITACʘM - the BRITACOF and the Belt and Road Initiative Tax Administration Capacity Enhancement Group (BRITACEG). In addition, the Advisory Board was established to advise on and assist in fulfilling the vision and the purpose of the BRITACʘM.

The BRITACEG and its network of tax academies were established.

The BRITACEG is a network composed of willing Member Tax Administrations and Observers of the Council which, making full use of their existing training institutions or expertise, are dedicated to enhancing tax capacity of the BRI jurisdictions by conducting tax-related training, research and technical assistance programs. Four BRI Tax Academies (BRITA) have been set up, upon the approval of the Council, in Kazakhstan, the Macau Special Administrative Region of China and the Mainland of China based on their existing tax institutions. More BRITAs will be set up in future.

The Wuzhen Statement and the Wuzhen Action Plan(2019-2021) were adopted.